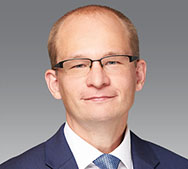 Jonathan C. Bond is a partner in the Washington, D.C., office of Gibson, Dunn & Crutcher LLP.  He is a member of the firm’s Litigation Department and its Appellate and Constitutional Law and Administrative Law and Regulatory Practice Groups.

Mr. Bond’s practice focuses on appellate litigation in the Supreme Court of the United States and in federal and state appellate courts across the country.  He has presented oral argument in the Supreme Court in 10 cases involving a range of legal issues—including healthcare and insurance, patents, taxation, administrative law, employment, and debt collection—and he has briefed more than 200 cases in the Supreme Court, including 26 cases at the merits stage.  In other federal and state appellate courts, Mr. Bond has briefed more than 30 cases and has presented argument in appeals involving federal preemption, employee benefits, and telecommunications.

Mr. Bond rejoined the firm in 2022 after serving for more than five years as an Assistant to the Solicitor General in the United States Department of Justice.  During his tenure in government, Mr. Bond represented the United States and its agencies in the Supreme Court in cases spanning a diverse array of subject areas, from international arbitration and intellectual property, to national security and the nondelegation doctrine, to taxation, trade regulation, and telecommunications.  He also provided strategic advice to the Solicitor General, other Department of Justice officials and components, and various federal agencies.

Other representative Supreme Court cases include:

Mr. Bond served as a law clerk to Justice Antonin Scalia of the Supreme Court of the United States and to Judge Jeffrey S. Sutton of the United States Court of Appeals for the Sixth Circuit.  He graduated with highest honors from the George Washington University Law School, where he received the John Bell Larner Award for the highest cumulative grade point average, served as Senior Articles Editor of the George Washington Law Review, and with his teammate won the Jacob Burns Van Vleck Constitutional Law Moot Court Competition.  Mr. Bond earned a master’s degree with Distinction from University College London, where  he studied as a Fulbright scholar and was awarded the Best Dissertation and Student of the Year prizes.  He received his undergraduate degree, summa cum laude, in political science from Grove City College.