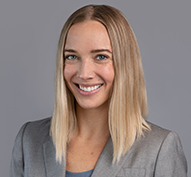 Jennifer Bracht is an associate in the Denver office of Gibson, Dunn & Crutcher.  She practices with the firm’s Litigation Department.

Ms. Bracht has a wide range of experience in several areas of law implicating different industries, legal issues, and factual scenarios.  Her specialty is being able to dive into any case and make a meaningful impact in whatever stage the case is in, particularly with respect to complex discovery, pre-trial, and trial.  She has played a leading role in all stages of litigation and has been a key team member in multiple trials and final hearings.

Ms. Bracht received her law degree from the University of California, Los Angeles, where she was elected to the Order of the Coif.  While in law school, Ms. Bracht was an articles editor for the UCLA Entertainment Law Review, a writing advisor in the Lawyering Skills program, and a 2L Representative of the Student Bar Association.  She also served as an extern for Presiding Justice Dennis Perluss of Division Seven of the Second District of the California Court of Appeal.  Ms. Bracht graduated cum laude in 2008 from the Leonard N. Stern School of Business at New York University with a Bachelor of Science degree in Marketing and Management.