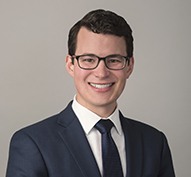 David Casazza is a senior associate in the Washington, D.C. office of Gibson, Dunn & Crutcher.  He practices in the firm’s Appellate and Constitutional Law, and Administrative Law and Regulatory Practice groups.

Mr. Casazza has represented clients in appellate and regulatory litigation before the Supreme Court of the United States, federal appellate courts, and federal district courts.  These cases have involved a wide range of subjects including separation of powers, federal rulemaking challenges, business reorganization, anti-terrorism claims and foreign sovereign immunity, energy infrastructure permitting, and a variety of First Amendment speech and religious liberty claims.  He has also represented clients in complex litigation, including large class actions, antitrust, and racketeering cases. He has been named by Best Lawyers from 2021 – 2023 as “One to Watch” in Appellate Practice.

Article - July 5, 2017 | ’Consent’ is the Next Big Battle Over Personal Jurisdiction
Top