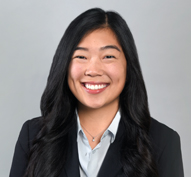 Hazel Chuang is an associate in the Los Angeles office of Gibson, Dunn & Crutcher. She currently practices in the firm’s Litigation Department.

Ms. Chuang earned her law degree in 2019 from the UCLA School of Law, where she was elected to the Order of the Coif. While in law school, Ms. Chuang served as Judicial Extern to the Honorable Paul L. Abrams, United States Magistrate Judge for the Central District of California, and to Justice Laurie D. Zelon of the California Court of Appeal for the Second District. Ms. Chuang was also a writing advisor in the legal research and writing program and a managing editor of the Asian Pacific American Law Journal.   Prior to law school, Ms. Chuang graduated magna cum laude from University of California, Irvine with a Bachelor of Arts in Sociology and Psychology and Social Behavior.

Ms. Chuang is admitted to practice law in the State of California and before the United States District Court for the Central District of California.