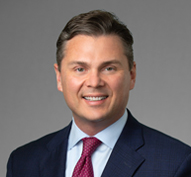 Mr. Cox is a business trial lawyer who represents plaintiffs and defendants in high-stakes commercial cases.  He has been a lead trial lawyer in computer software trade secrets cases, several actions related to the Bernard L. Madoff fraud, royalty disputes, patent litigation, and other business crisis situations.  In each of his representations, he prides himself on his ability to get to the heart of a complex matter, making everything as simple as possible, but not simpler (to quote Einstein), to tell a winning story to a jury or judge.

He continues to be one of the youngest trial lawyers in Texas to receive band ranking recognition in commercial litigation from Chambers USA, in which clients have praised him as “a go-to trial lawyer” who is commercially savvy and a strategic thinker.

Mr. Cox was one of 59 Americans selected as a Presidential Leadership Scholar, completing a year-long leadership curriculum centered around four presidential administrations.  He currently serves on the board of directors for the Houston Bar Association, on the Executive Committee of UTHealth Development, and as Vice President of Da Camera of Houston.  Mr. Cox is the past Chairman of the Buffalo Bayou Partnership and the Texas Lyceum, the pre-eminent leadership organization for Texans younger than 45.

Mr. Cox maintains a close connection to Duke Law School, serving on its Board of Visitors and on its Adjunct Faculty, teaching a class on Hearings Practice each of the last four years.  He is named in Best Lawyers in America for commercial and intellectual property litigation and is noted as a “Texas Super Lawyer” by Thomson Reuters and a “Houston Top Lawyer” by H Magazine.  In 2012, he was recognized as the Woodrow B. Seals Outstanding Young Lawyer in Houston.

Prior to joining the firm, he practiced with Yetter Coleman LLP and Williams & Connolly LLP.  Mr. Cox was a law clerk for the Honorable Anthony J. Scirica, Chief Judge of the United States Court of Appeals for the Third Circuit, in Philadelphia.

University of Cambridge - 2002 Master of Philosophy