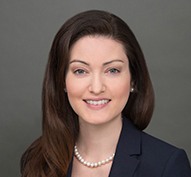 Kate Dominguez is a partner in the New York office of Gibson, Dunn & Crutcher and is Co-Chair of Gibson Dunn’s Intellectual Property Practice Group, focusing on patent litigation.

Ms. Dominguez specializes in representing clients at trial.  Some of her trial experience includes a three-week jury trial in the District of Nebraska on behalf of a wireless carrier client, in which Gibson Dunn obtained a complete defense verdict across 30 infringement claims. Ms. Dominguez’s role at trial included examining the client’s sole technical expert (non-infringement and invalidity) and one of its two fact witnesses. Ms. Dominguez’s representative trial experience also includes a jury trial in the District of Delaware, in which Gibson Dunn represented the patentee (the market leader in network storage equipment) and obtained an eight-figure damages award for the client. Ms. Dominguez’s participation included examining one of the client’s fact witnesses and arguing jury instructions and other legal issues. Ms. Dominguez has also successfully argued numerous pre-trial and trial motions.

Ms. Dominguez has been named to the Super Lawyers New York Metro “Rising Stars” list in the category of Intellectual Property each year since 2016. Prior to joining the firm, she served as a judicial law clerk for the Honorable Richard G. Taranto of the United States Court of Appeals for the Federal Circuit. Ms. Dominguez earned her Juris Doctor in 2008 from Yale Law School. She received her Bachelor of Arts, with honors, from Wesleyan University in 2003. Ms. Dominguez also obtained her Master of Science in Teaching from Pace University in 2005, as part of her work as a Teach For America corps member.