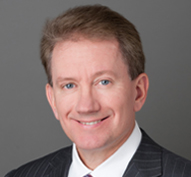 Sean P. Griffiths is a partner in the New York office of Gibson, Dunn & Crutcher.  Mr. Griffiths is a member of the Firm’s Executive Committee, and previously served as Co-Chair of Gibson Dunn’s Private Equity Practice.

Mr. Griffiths has extensive experience representing private equity firms and their portfolio companies in mergers and acquisitions, and companies in complex carve out and spin-off transactions and acquisitions.  Mr. Griffiths also has extensive experience in corporate finance in both public and private capital markets, troubled company representation (crisis management), and general corporate and securities compliance matters.

Mr. Griffiths is ranked by Chambers Global: The World’s Leading Lawyers for Business, Chambers USA: America’s Leading Lawyers for Business and Legal Media Group’s Expert Guides Guide to the World’s Leading Banking, Finance and Transactional Lawyers as a leading private equity lawyer. Chambers USA describes Mr. Griffiths as a “pragmatic and effective problem solver in complex and tense transaction negotiations” and notes that “it’s rare to come upon a situation he hasn’t come across before,” and that he “brings a lot of tactical insight” to deals, as well as being “responsive and very client-friendly.”  In addition, Mr. Griffiths is recognized as a leading lawyer in the area of Leveraged Buyouts and Private Equity Law by The Best Lawyers in America®, as “Highly Regarded” by IFLR1000 and was named one of “Hollywood’s Top 20 Dealmakers of 2018” by The Hollywood Reporter.

Mr. Griffiths joined Gibson Dunn in 1986 after earning his Juris Doctor from the University of Virginia.  He received his Bachelor of Science degree with highest distinction from Purdue University in 1983, majoring in finance.

Mr. Griffiths has been admitted to practice in the States of New York and California.