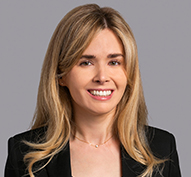 Ashley Hammett is a New York qualified associate in the London office of Gibson, Dunn & Crutcher. She is a member of the firm’s Litigation and International Arbitration Groups.

Ms. Hammett has acted in a broad range of transnational disputes, with experience in investment treaty and commercial arbitration, litigation involving sovereign states and matters involving public international law and human rights. In the arbitration sphere, she has represented clients in cases conducted under the auspices of the ICSID, UNCITRAL, LCIA and ICC Rules. Ms Hammett has also represented clients in sensitive, high stakes investigations and litigation spanning several jurisdictions.

Prior to joining the firm, Ms. Hammett was an associate with the litigation and arbitration teams of global law firms in New York and London. She has also worked for the International Criminal Court in The Hague and in the Criminal Practice Division at Legal Aid in Australia.

University of Queensland - 2013 Bachelor of Arts