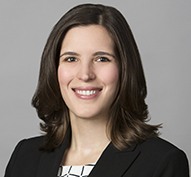 Ms. Herold, a native Spanish speaker, has a broad range of pro bono experience, including significant experience in immigration-related pro bono matters.  She has represented individuals seeking asylum, Special Immigrant Juvenile Status (“SIJS”), U- and T-visas, and other forms of immigration relief.  In addition, she represented a family that was wrongfully detained and denied entry after the 2017 Muslim travel ban and assisted families separated by the 2018 “Zero Tolerance” policy—including representing parents seeking reunification with their children and, later, representing families pursuing Federal Tort Claims Act (“FTCA”) claims against the federal government.

In 2016, the Capital Area Immigrants’ Rights (“CAIR”) Coalition named Ms. Herold to its Pro Bono Honor Roll in recognition of her work on behalf of a young victim of human trafficking.  This award is given annually to pro bono attorneys who demonstrate an extraordinary commitment to access to justice for their clients.  She also received Gibson Dunn’s 2017 and 2018 Frank Wheat Team Award, given annually to lawyers who have demonstrated leadership and initiative in their pro bono work and obtained significant results for their pro bono clients.

Ms. Herold is admitted to practice in Colorado, Maryland, and the District of Columbia.  She is a member of the Firm’s Pro Bono Committee and the Denver Diversity Committee, and is active in the Colorado Hispanic Bar Association and the Hispanic National Bar Association.