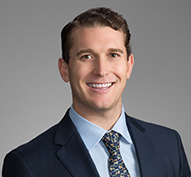 Scott Hvidt is an associate in the Dallas office of Gibson, Dunn & Crutcher.   He practices in the firm’s Litigation Department, where he focuses on complex civil litigation, antitrust and class action matters.

Scott has been recognized by The Best Lawyers in America© as “Ones to Watch” in Litigation-Antitrust (2023). Mr. Hvidt participated in and graduated from the Emerging Leaders in Philanthropy program with the Communities Foundation of Texas (2019–2020).

Prior to joining Gibson Dunn, Mr. Hvidt served as a law clerk to the Honorable A. Joe Fish of the United States District Court for the Northern District of Texas.  Before entering law school, Mr. Hvidt worked as a litigation paralegal in the New York office of DLA Piper LLP and managed a two-week arbitration.

In 2015, Mr. Hvidt graduated from Columbia Law School, where he earned the James Kent academic distinction. He received the Julius Silver Foundation Award for best student note for Columbia’s Science and Technology Law Review. Mr. Hvidt also served as the Executive Articles Editor for Columbia’s Science and Technology Law Review.  While in law school, Mr. Hvidt worked as an extern for the Honorable Debra Livingston of the United States Court of Appeals for the Second Circuit, and worked for the Lawyering in the Digital Age Clinic, where he represented a homeless disabled man in his successful appeal for supplemental security income.

Mr. Hvidt received his Bachelor of Arts in History from Princeton University, where he wrote for the sports section of The Daily Princetonian, played on the varsity men’s water polo team that took third place in the 2009 NCAA Final Four, and received the Scott Roche Award as a member of that team.

Mr. Hvidt is a member of the State Bar of Texas.