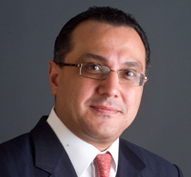 Emad H. Khalil is a partner in the New York office of Gibson, Dunn & Crutcher.  His experience encompasses a broad range of corporate activity, including mergers and acquisitions, private equity (including fund formation), project development and finance (including Islamic finance), capital markets, and banking and restructuring.

Chambers & Partners Asia Pacific, Legal 500 Asia Pacific and Best Lawyers consistently recommend Mr. Khalil as a leading lawyer for projects and energy.  He has represented participants in energy and infrastructure projects throughout Asia, the Middle East and the United States.

Mr. Khalil also regularly advises private equity/hedge funds, venture capital firms and other investors, as well as investees in a wide range of sectors including real estate, energy and infrastructure and biotechnology.  In addition, Mr. Khalil has been a principal adviser to the Hashemite Kingdom of Jordan on developing and enacting securities legislation.

Chambers & Partners Asia-Pacific identifies Mr. Khalil as a leading lawyer in the field of capital markets. Chambers Global: The World’s Leading Lawyers for Business Guide notes Mr. Khalil as an experienced practitioner of Brunei General Business Law and as an experienced practitioner in the field of capital markets in Singapore.

Prior to joining Gibson Dunn, Mr. Khalil was a partner at Jones Day and Co-Chair of its project development and finance practice, resident in New York and then Singapore.  Before joining Jones Day, he was co-founding partner of the New York office of Afridi & Angell, where he also spent significant time working out of the Dubai and Abu Dhabi offices.  Mr. Khalil was previously associated with the law firm of Cravath, Swaine & Moore in New York.

Mr. Khalil was born in Cairo, Egypt and raised in New York City.  He is also fluent in Arabic.

Mr. Khalil received his Juris Doctor from Harvard Law School in 1990 and his Bachelor of Arts from Cornell University in 1987.  He is admitted to practice in New York.