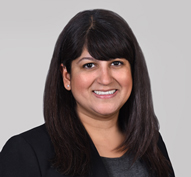 Poonam Kumar is of counsel in the Los Angeles office of Gibson, Dunn & Crutcher and a member of its White Collar Defense & Investigations and Litigation practice groups.  She is a former federal prosecutor with significant first-chair trial experience and an extensive background in handling high-stakes criminal and civil matters across a broad range of practice areas.

From 2014 to 2022, Poonam served as an Assistant United States Attorney in the United States Attorney’s Office for the Central District of California where she investigated and prosecuted complex financial crimes, including corporate and securities fraud, embezzlement, healthcare fraud, bank fraud, import/export crimes, tax crimes, and money laundering.  Poonam was a Deputy Chief of the Major Frauds section where she supervised a large team of federal fraud prosecutors.  Representative matters from her time at the U.S. Attorney’s Office include the investigation and prosecution of a multinational scheme to inflate revenue of a company publicly traded on a foreign exchange and to evade nearly $2 billion in import duties as well as the conviction at trial of a South Korean official for laundering bribes he received in connection with his government position.  For her work with the Department of Justice, Poonam received the United States Attorney General’s John Marshall Award for Outstanding Achievement in 2020.

Prior to joining DOJ, Poonam practiced for six years at Gibson Dunn in Los Angeles and at Debevoise & Plimpton LLP in New York.  During this period, Poonam regularly represented corporate and individual clients in DOJ and SEC investigations and conducted internal investigations for multinational companies operating in Latin America, Europe, Asia, and the Middle East.

Poonam is an active member of the legal community and committed to pro bono work.  She is currently Co-Chair of the ABA White Collar Crime Committee for Southern California.  She previously served as counsel to the Citizens’ Commission on Jail Violence that investigated the inappropriate use of force in Los Angeles County jails.  Poonam received the ACLU Community Service Pro Bono Award for her work with the Commission.