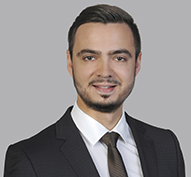 Nikita Malevanny is an associate in the Munich office of Gibson, Dunn & Crutcher. He is a member of the firm’s White Collar Defense and Investigations, Litigation, International Trade, Media, Entertainment and Technology and Privacy, Cybersecurity and Data Innovation Practice Groups.

Mr. Malevanny focuses on internal and regulatory investigations in the areas of corporate anti-corruption and technical compliance. His further areas of expertise include intellectual property and corporate law.

Handelsblatt / The Best Lawyers™ in Germany 2022/2023 have recognized Mr. Malevanny in their list “Ones to Watch” for Intellectual Property Law.

Prior to joining Gibson Dunn, he was a doctoral fellow and scholarship holder at the Max Planck Institute for Innovation and Competition in Munich. He conducted internships at the Copenhagen office of a large international law firm and at a commercial law boutique in Moscow providing legal advice to international clients doing business in Russia. In 2011, his comparative law study on corporate takeovers in the EU, Germany and Russia was awarded the German-Russian Lawyers Prize for the best paper written in German.

University of Freiburg - 2010 Master of Law