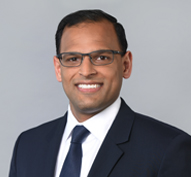 Shaun A. Mathur is an associate in the Los Angeles office of Gibson, Dunn & Crutcher, where his practice focuses on complex commercial litigation at the trial and appellate levels.  He is a member of the firm’s Litigation, Appellate and Constitutional Law, Class Actions, Media, Entertainment and Technology, and Intellectual Property Practice Groups.

Mr. Mathur represents clients in a variety of industries, including technology, media and entertainment, consumer products, automobile, and pharmaceutical, among others.  He has extensive experience advising clients in class actions, mass arbitrations, and copyright and trademark infringement disputes.  He also has drafted numerous merits and amicus briefs in the U.S. Supreme Court, multiple federal circuit courts, and all levels of the California appellate courts, and has presented oral argument to the Seventh Circuit.  From 2021-2023, he was recognized as a Best Lawyers: Ones to Watch in America™ in Technology Law, and in 2023 was also recognized in Entertainment and Sports Law and Litigation – Intellectual Property.

Mr. Mathur graduated with Highest Honors and Order of the Coif from the S.J. Quinney College of Law at the University of Utah, where he served as an Articles Editor on the Utah Law Review.  He earned his Bachelor of Science degree in Chemistry from Stony Brook University.

Mr. Mathur is a member of the State Bar of California and is admitted to practice before the United States Court of Appeals for the Seventh, Ninth, and Tenth Circuits.