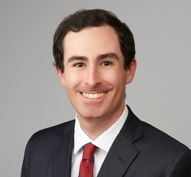 Brian McCarty is an associate in the Washington, D.C. office of Gibson, Dunn & Crutcher, where he practices in the firm’s Litigation Department. He is a member of the firm’s Appellate & Constitutional Law and Administrative Law & Regulatory practice groups.

Mr. McCarty is admitted to practice law in the District of Columbia and before the U.S. Court of Appeals for the Seventh Circuit.

University of Connecticut - 2016 Bachelor of Arts