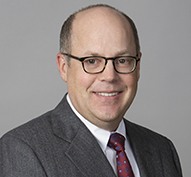 Greg Merz is of counsel in the Washington DC office of Gibson, Dunn & Crutcher.  He  is a member of the firm’s Investment Funds practice with a focus on regulatory issues, product development and corporate transactions for investment advisers, private and registered investment funds and other financial services products and institutions. Mr. Merz has extensive experience with the application of federal and state securities laws to all aspects of the asset management industry, including the Investment Advisers Act of 1940, the Investment Company Act of 1940, Securities Act of 1933, the Securities Exchange Act of 1934, Dodd-Frank Wall Street Reform and Consumer Protection Act, Graham-Leach-Bliley, the USA PATRIOT Act, the Bank Secrecy Act and state blue sky laws.  He has been recognized as one of The Best Lawyers in America® for his work in Private Funds and Hedge Funds.

Prior to returning to private practice in 2011, Mr. Merz was employed in a number of in-house positions in the asset management industry.  Mr. Merz was a Managing Director & Deputy General Counsel for eight years at Legg Mason, where he focused on counseling the firm’s various registered investment advisor affiliates on regulatory matters, product development and government relations. He was also involved in supporting Legg Mason’s retail managed financial products (including mutual funds, closed end funds, collective investment trusts, 529 plans and retail separately managed accounts) and in the negotiation and implementation of a number of corporate acquisitions, divestitures and restructurings for the firm.

From 1985 to 1992, Mr. Merz was an Associate in the New York and London offices of Debevoise & Plimpton, where he was engaged in a general corporate practice with an emphasis on financial services, mergers & acquisitions and international securities law.

Mr. Merz is a member of the District of Columbia, Massachusetts and New York bars.