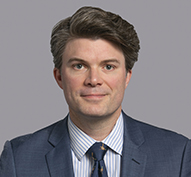 Cason Moore is an Of Counsel in the London office of Gibson, Dunn & Crutcher. Mr. Moore is a member of the Private Equity, Mergers and Acquisitions and Capital Markets practice groups.

Mr. Moore advises on a broad range of corporate transactional and advisory matters, with a focus on cross-border M&A transactions representing sponsors and public companies. He also advises both issuers and underwriters on capital markets transactions, particularly in high-yield issuances (including green bond issuances) and debt restructurings.

Prior to joining Gibson Dunn, Mr. Moore was a counsel at Vinson & Elkins in London and also practiced with Skadden, Arps, Slate, Meagher & Flom in New York and London. Mr. Moore has also worked at the Bank of England and in-house at a leading global asset manager.

Mr. Moore received his B.A with distinction in 2003 from the University of Virginia, where he was a Jefferson Scholar, and received his J.D. in 2007 from Columbia Law School, where he was a James Kent Scholar and the recipient of the Andrew D. Fried Memorial Prize. He is admitted to practice in New York and is a Registered Foreign Lawyer (England & Wales).

*Some of these representations occurred prior to Mr. Moore’s association with Gibson Dunn.

University of Virginia - 2003 Bachelor of Arts