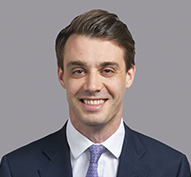 Piers Plumptre is an English qualified associate working in the London office of Gibson, Dunn & Crutcher. Mr. Plumptre is a member of the Dispute Resolution and International Arbitration Groups.

Mr. Plumptre also regularly acts for clients seeking to enforce arbitral awards and judgments, both in the UK and elsewhere. Examples include recently seeking and obtaining a freezing injunction and related relief from the English High Court, in connection with a US$ 550 million ICC arbitration award arising out of a mining dispute. He has also appeared (as junior to Charlie Falconer) in the recent proceedings bought by Tethyan Copper Company in the BVI (where he is admitted to practice), seeking to enforce an ICSID award worth more than US$ 6 billion against the Government of Pakistan.

Mr. Plumptre’s experience of offshore litigation also includes acting for UBS in BVI proceedings brought by the liquidator of the largest Madoff feeder funds to recover monies paid out during the lives of the funds; including representing UBS before the BVI High Court, the Eastern Caribbean Court of Appeal and the Privy Council (sitting as the ultimate BVI appellate court).

Mr. Plumptre is recognised by the 2023 edition of Best Lawyers in the United Kingdom as “One to Watch” for International Arbitration.

Prior to joining Gibson Dunn, Mr. Plumptre completed his pupillage at a leading commercial/chancery barristers’ chambers, having been called to the Bar of England and Wales in November 2011. Reflective of the international nature of his practice, he is also admitted to the bar of the British Virgin Islands.  In 2016/2017, he spent 18 months working in Gibson Dunn’s New York Office, focusing primarily on international arbitration.

University of Oxford - 2009 Bachelor of Arts