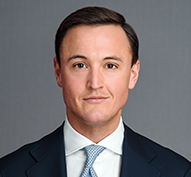 Ben A. Sherwood is an associate in the New York office of Gibson, Dunn & Crutcher LLP.  He is a commercial litigator with a focus on antitrust disputes.  He has represented clients in a range of industries, including financial services, healthcare, industrials, oil and gas, pharmaceuticals, renewable energy, and technology.

Mr. Sherwood is admitted to practice in the State of New York and before the United States District Courts for the Southern and Eastern Districts of New York.

University of Chicago - 2012 Bachelor of Arts