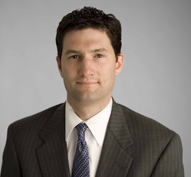 Geoffrey M. Sigler is a partner in Gibson, Dunn & Crutcher’s Washington, D.C. office.  He is a Co-Chair of the Insurance and Reinsurance Practice and a member of the firm’s Litigation, Class Action, Health Care, and Insurance Practice Groups.  Throughout Mr. Sigler’s career, he has successfully represented corporate clients in dozens of class actions and other complex cases in federal and state courts throughout the United States.

In recognition of Mr. Sigler’s repeated “successes in high-stakes litigation,” he has been named by Law360 as an MVP – one of five “elite” attorneys for the health care industry.  Mr. Sigler also has been recognized by Law360 as a “Rising Star,” based on his “string of high-profile wins” for the insurance industry.  Mr. Sigler frequently litigates cases and advises clients on cutting-edge issues arising under ERISA, the Affordable Care Act, the Medicare Act, the False Claims Act, and other laws and regulations.

Mr. Sigler also has represented corporate clients, audit committees, and individuals in investigations by the United States Department of Justice, the Department of Labor, the Securities and Exchange Commission, state attorneys general, and other federal and state regulators.

University of Richmond - 1998 Bachelor of Arts