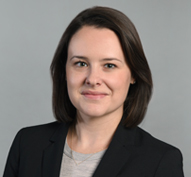 Ginny Smith is an associate in the Century City office of Gibson, Dunn & Crutcher.  She currently practices in the firm’s Litigation Department and in its Environmental Litigation and Mass Tort Practice Group.  Prior to joining Gibson Dunn, Ms. Smith served as a law clerk to the Honorable James V. Selna of the United States District Court for the Central District of California.