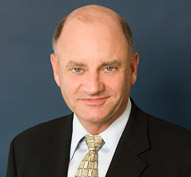 Jeffrey T. Thomas, a partner in the Orange County office of Gibson, Dunn & Crutcher LLP, joined the firm in 1983.  A member of the firm’s Litigation Department and its IP and Antitrust and Competition Practice Groups, Mr. Thomas has extensive experience in intellectual property, antitrust, unfair competition and general commercial litigation.

Mr. Thomas, a fellow in the American College of Trial Lawyers, is an experienced trial lawyer who has successfully handled numerous significant intellectual property and complex business cases.  He has represented major clients of the firm in patent and trade secret litigation, including trials that resulted in verdicts in favor of the firm’s clients.  He is a co-author of Ross, Intellectual Property Law, Damages and Remedies (Law Journal Press, 2000).  Mr. Thomas is one of the founding masters of the Orange County IP inn of court.  He has also successfully represented clients of the firm in antitrust, breach of contract and business tort cases.  He recently served as lead trial counsel for Hewlett-Packard Co. in a significant matter against Oracle Corp. in which HP achieved a complete victory after trial.

The following is a representative sample of Mr. Thomas’ cases.