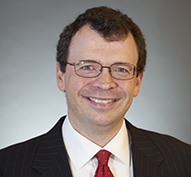 ​Robert Trenchard is a litigation partner in the New York office of Gibson, Dunn & Crutcher.  He is a member of Gibson Dunn’s Intellectual Property Practice.  He has maintained a diverse litigation practice in New York for 20 years.  He represents corporate and individual clients in complex civil and regulatory matters in federal and state courts through and including trial, and before governmental bodies. Mr. Trenchard is recognized in IAM Patent 1000, LMG Life Sciences and has been named a New York “SuperLawyer” since 2011.

Mr. Trenchard has extensive first-chair experience in life-science patent litigation, including in U.S. district court and before the U.S. Patent Trial and Appeal Board. He has litigated cases involving pharmaceuticals, biologics, genetics, siRNA and medical devices.

Mr. Trenchard has also represented clients as first- or second-chair in domestic and international market manipulation and antitrust matters, securities cases and many others. He has represented clients in individual and class actions in multiple courts around the country, and before the US Commodity Futures Trading Commission (CFTC), Securities and Exchange Commission (SEC), State AG offices and other governmental bodies.

Representative non-confidential matters include the following: