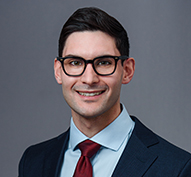 Curtis Vella is a corporate associate in the New York office of Gibson, Dunn & Crutcher and a member of the Investment Funds Practice Group.

Prior to joining Gibson Dunn, Mr. Vella was an associate at Weil, Gotshal & Manges LLP where he was a member of the Private Funds practice group in New York.  Before practicing in New York, Mr. Vella was a solicitor in the Sydney office of Herbert Smith Freehills, where he advised clients on a range of domestic and cross-border matters, including M&A, equity capital markets, and other structured transactions.

In addition to his day-to-day practice, Mr. Vella acts on a variety of pro bono matters.

Mr. Vella is admitted to practice in the State of New York.  He is also admitted in the Supreme Court of New South Wales and the High Court of Australia.

The University of Sydney - 2014 Bachelor of Commerce