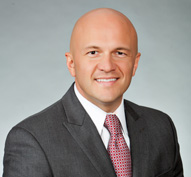 Robert A. Vincent is a partner in the Dallas office of Gibson, Dunn & Crutcher LLP.  He is a member of the firm’s Litigation Department and practices in the Intellectual Property Practice Group.

Mr. Vincent’s experience includes all aspects of litigation, including pre-suit investigation, e-discovery, taking and defending numerous fact and expert depositions, summary judgment and Markman proceedings, trial preparation, and post-trial briefing.  He has successfully written and argued motions in multiple jurisdictions, including the Northern and Eastern Districts of Texas and the District of New Jersey.

Mr. Vincent earned his law degree from Columbia University School of Law in 2006, where he was named a Kent Scholar.  He also received the Whitney North Seymour Medal, awarded annually to the student who shows the greatest promise of becoming a distinguished trial advocate.  While in law school, Mr. Vincent worked as an extern for the Honorable Sonia Sotomayor of the United States Court of Appeals for the Second Circuit.  He earned his bachelor’s degree in Chemical Engineering from Brigham Young University in 2003.

Mr. Vincent is a member of the State Bar of Texas.  He is also admitted to practice before the United States District Courts for the Northern and Eastern Districts of Texas and the United States Court of Appeals for the Fifth Circuit.