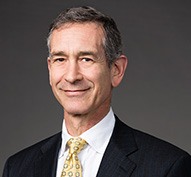 David M. Wilf is a partner in the New York office of Gibson, Dunn & Crutcher.  Mr. Wilf’s practice focuses on mergers and acquisitions, joint ventures, strategic alliances and general corporate matters, including strategic complex corporate contracts.  He is Co-Chair of Gibson Dunn’s Transportation and Space Group.  Mr. Wilf has worked on both coasts of the United States, in London and in Tokyo, has represented United States entities in Europe, Asia, Latin America and Africa in acquisitions, divestitures and joint ventures and non-U.S. entities in similar types of domestic and international transactions, in addition to his general domestic U.S. practice.  Mr. Wilf has extensive experience in technology, satellite, consumer products and bankruptcy acquisitions.  He also works in the area of private equity and has represented several secondary funds in their investment activities.  Mr. Wilf is recognized as a leading M&A attorney by the International Financial Law Review.

Mr. Wilf received his Juris Doctor in 1982 from University of California Hastings College of the Law and his undergraduate degree in 1979 from the University of Pennsylvania, where he graduated with honors.

Mr. Wilf is admitted to the bar in both California and New York.

University of Pennsylvania - 1979 Bachelor of Arts