In a major development on 13 September 2022, the UAE Ministry of Justice called upon the Dubai Courts to enforce judgments of the English Courts in the UAE going forward, based on principles of reciprocity.

The English Courts were historically reluctant to enforce UAE-issued judgments; and the UAE courts had for decades used the lack of reciprocity as a bar to the enforcement of English judgments. The English High Court’s recent decision in Lenkor Energy Trading DMCC v Puri (2020) EWHC 75 (QB) was a welcome development. In that seminal case, which was upheld on appeal, the High Court enforced a ‘bounced cheque’ judgment of the Dubai Court of Cassation. The High Court and Court of Appeal both ruled that the Dubai judgment was a final and conclusive judgment of a court of competent jurisdiction, which did not offend English public policy.

Days ago, on 13 September 2022, the UAE Ministry of Justice issued an official communication to the Dubai Courts, confirming that the Lenkor decision “constitutes a legal precedent and a principle binding on all English Courts according to their judicial system”.

In an unprecedented move, the UAE Ministry of Justice therefore asked the Dubai Courts to:

This important development provides confidence for creditors looking to enforce English Court judgments in the UAE. It is an encouraging development in terms of the ongoing judicial cooperation between the English and Dubai courts.

It also opens additional avenues for the enforcement of arbitral awards. Creditors of London-seated arbitral awards may now consider proceeding directly to the Dubai courts after enforcing their awards at the seat of arbitration under s. 66 of the Arbitration Act. This is a useful alternative to the traditional path of asking the Dubai Courts to recognise and enforce arbitral awards under the New York Convention, which has produced mixed results. It is also an alternative to the to the well-trodden path of using the (award creditor-friendly) DIFC Courts as a gateway to the enforcement of London-seated arbitral awards in Dubai and beyond.

The context: no applicable enforcement and recognition treaties between the UK and the UAE

There is no bilateral treaty between the UAE and the UK for the reciprocal recognition and enforcement of judgments (other than the Treaty between the UK and the UAE on Judicial Assistance in Civil and Commercial Matters, which lacks an enforcement mechanism, and the memoranda of understanding issued by the Courts of the DIFC and the ADGM).

In the absence of a treaty, judgment creditors must bring a claim to enforce a UAE judgment in England and Wales under common law. Under the common law test, the English court must be satisfied that the relevant UAE court: (i) had original jurisdiction to render its judgment; (ii) issued a final and conclusive judgment; and (iii) issued a judgment for a definite and calculable sum. If that is proven, then there are only limited defences available to a judgment debtor – chief amongst which is that enforcement of the foreign judgment would contravene English public policy.

Likewise, in the absence of a bilateral enforcement treaty, the UAE Courts will only enforce foreign judgments “under the same conditions laid down in the jurisdiction issuing the order”—in other words, when reciprocity exists with the issuing jurisdiction. This is set out in Article 85 of Cabinet Resolution No. 57 of 2018 concerning the Executive Regulations of Federal Law No. 11 of 1992 (as amended). Prior to the Lenkor decision, the English Courts were not in the practice of readily enforcing Dubai Court judgments; and the UAE courts had treated this lack of reciprocity as a bar to enforcement.

The Lenkor decision: a landmark decision of the English court to enforce a judgment of the UAE court

The English High Court enforced a ‘bounced cheque’ judgment from the Dubai court in Lenkor.

Mr Puri, a UK citizen, was the principal and controller of IPC Dubai. He had signed two security cheques in favour of Lenkor on IPC’s behalf. Lenkor and IPC then fell into dispute. Lenkor prevailed in an arbitration against IPC, and when IPC failed to satisfy the resulting arbitral award, Lenkor attempted to cash the cheques. When the cheques bounced, Lenkor brought Dubai court proceedings against Mr Puri personally.

The Dubai courts—including the final appellate court, the Dubai Court of Cassation—found that Mr Puri had contravened Article 599/2 of the UAE Commercial Transactions Law (UAE Federal Law No. 18 of 1993). Under that provision, the person who draws a cheque is deemed personally liable for the amount of the cheque; and a cheque may not be issued unless the drawer has, at the time of drawing the cheque, sufficient funds to meet it. The Dubai Court of First Instance entered judgment against Mr Puri for an AED equivalent of about USD 33.5 million, plus 9% interest per annum. This was upheld on multiple rounds of appeal, including ultimately by the Dubai Court of Cassation.

Mr Puri challenged the enforcement of the Dubai judgment in the English Courts. He argued that the judgment offended English public policy, on the bases that: (i) the underlying transaction between IPC and Lenkor was tainted by illegality; (ii) unlike Dubai law, English would not find Mr Puri personally liable for IPC’s debt and would not permit the piercing of the corporate veil; and (iii) the 9% interest awarded was unduly high and an unenforceable penalty.

The English High Court dismissed these arguments, because: (i) the question was whether the UAE Court’s judgment offended public policy, not the underlying transaction; (ii) the finding of Mr Puri’s personal liability was a question of Dubai law; and (iii) the interest rate awarded was not unduly high or an unenforceable penalty.

The 13 September 2022 direction from the UAE Ministry of Justice

The Lenkor decision is seminal in that it has demonstrated reciprocity between the UAE and the UK—certainly from the perspective of the UAE Ministry of Justice. The 13 September 2022 communication, issued from Judge Abdul Rahman Murad Al-Blooshi, Director of International Cooperation Department of the Ministry of Justice, to His Excellency Tarish Eid Al-Mansoori, Director General of the Dubai Courts, confirms (in an unofficial translation) that:

“…based on the Treaty between the United Kingdom of Great Britain and Northern Ireland and the United Arab Emirates on Judicial Assistance in Civil and Commercial Matters, and the desire to strengthen fruitful cooperation in the legal and judicial field;

Whereas, the aforementioned Treaty does not provide for enforcement of foreign judgments, and states that the judgments should be enforced according to the relevant applicable mechanism set forth in the local laws of both countries;

Whereas, Article (85) of the Executive Regulation of the Civil Procedures Law, as amended in 2020, stipulates that judgments and orders issued in a foreign country may be enforced in the State under the same conditions prescribed in the law of that country, and the legislator does not require an agreement for judicial cooperation to enforce foreign judgments, and such judgments may be enforced in the State according to the principle of reciprocity; and

Whereas, the principle has been considered by the English Courts upon previous enforcement of a judgment issued by Dubai Courts by virtue of a final judgment issued by the High Court of the United Kingdom in Lenkor Energy Trading DMCC v Puri (2020) EWHC 75 (QB), which constitutes a legal precedent and a principle binding on all English Courts according to their judicial system,

The Arabic original is available below: 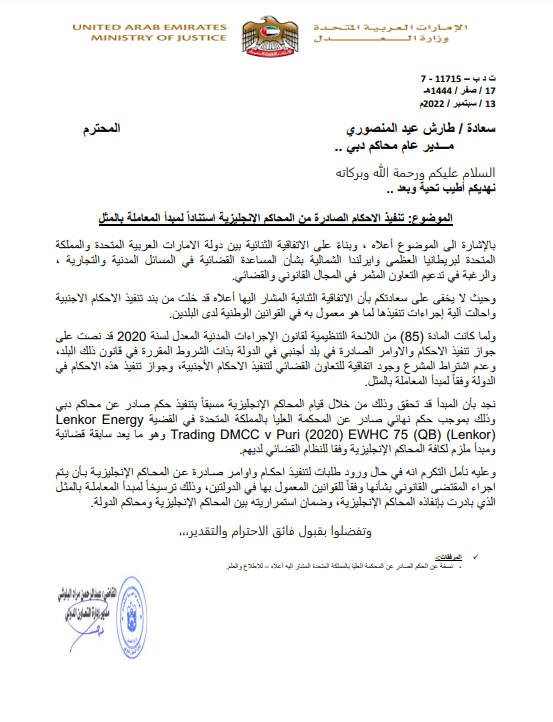 This development provides confidence for creditors looking to enforce English Court judgments in the UAE. It also opens additional avenues for arbitral award creditors to proceed directly to the Dubai courts once a London-seated award has been enforced at the seat of arbitration (as an alternative to the standard New York Convention route or the use of the DIFC Courts as a gateway). It remains to be seen whether the courts of Abu Dhabi will adopt a similar view. Either way, this is an important development given the close trade links between the UAE and the UK, and it demonstrates a pro-enforcement stance from the UAE Ministry of Justice, which is welcome news.

The following Gibson Dunn lawyers assisted in the preparation of this client update: Penny Madden KC and Nooree Moola.

Gibson Dunn’s lawyers are available to assist in addressing any questions you may have regarding these issues. Please contact the Gibson Dunn lawyer with whom you usually work, any member of the firm’s International Arbitration, Judgment and Arbitral Award Enforcement or Transnational Litigation practice groups, or any of the following practice leaders and members: