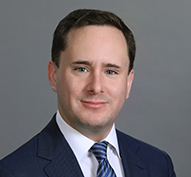 George B. Adams is a litigation associate in the San Francisco office of Gibson, Dunn & Crutcher LLP.  Mr. Adams has advised and advocated for individuals, corporations, technology and entertainment companies, and various financial institutions in a wide variety of business disputes, with an emphasis on securities litigation and complex commercial litigation.  Mr. Adams also has experience representing clients in shareholder actions, internal investigations, antitrust actions, and other corporate law matters, and he has achieved a strong record of success for his clients in state and federal courts across the United States.

Mr. Adams also has an active pro bono practice.  Among other matters, he played a lead role in prosecuting a prisoner-rights class action on behalf of more than thirty-thousand individuals for unconstitutional conditions of confinement at two local jails.

Before joining Gibson Dunn, Mr. Adams was a litigation associate in the New York and San Francisco offices of Shearman & Sterling LLP.  Previously, Mr. Adams served as a law clerk to the Honorable John F. Keenan of the United States District Court for the Southern District of New York.