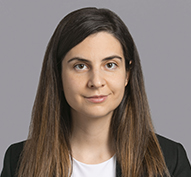 Marija Bračković is an associate in the London office of Gibson, Dunn & Crutcher. She is a member of the firm’s Litigation and International Arbitration Groups.

Ms. Bračković has substantial experience in both domestic and international dispute resolution, including litigation and investigations. Her practice has an emphasis on high-profile and politically sensitive matters, such as cases relating to the proceeds of crime, an investigation into alleged LIBOR manipulation and allegations of international crimes. She has acted in matters in the UK, Bangladesh, Sri Lanka, Sierra Leone, Iraq and Cambodia, representing diverse clients including governments, political parties, non-governmental organizations and private individuals. She has particular experience in advising and acting for banks and financial institutions.

Prior to joining Gibson Dunn, Ms. Bračković was an associate in the Litigation and Dispute Resolution team of another international law firm. She previously practiced at a leading set of barristers’ chambers in London. Called to the bar in 2010, she is an experienced advocate and has appeared in all manner of proceedings, including jury trials, courts martial and tribunal hearings, as both a sole and junior advocate.

University of Cambridge - 2006 Bachelor of Arts