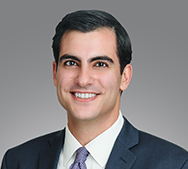 Lefteri J. Christos is a litigation associate in the New York office of Gibson, Dunn & Crutcher.

Mr. Christos received his Juris Doctor in 2020 from Columbia Law School, where he was named a James Kent Scholar and a Harlan Fiske Stone Scholar and served as an Articles Editor of the Columbia Law Review.  He received a Bachelor of Arts with honors from the University of Texas at Austin in 2014, where he was elected to Phi Beta Kappa.

Prior to law school, Mr. Christos was a manager at Lionsgate Entertainment in the Motion Picture Group.

Mr. Christos is admitted to practice in the State of New York.

University of Texas at Austin - 2014 Bachelor of Arts