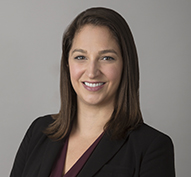 Rachel Levick Corley is an associate in the Washington, D.C. office of Gibson, Dunn & Crutcher.  She practices in the firm’s Litigation Department and is a member of the Environmental Litigation and Mass Tort Practice Group.  Ms. Corley has represented clients in a wide range of federal and state litigation, agency enforcement actions, cost recovery cases, and administrative rulemaking challenges.  She was named by Best Lawyers as a 2022 “One to Watch” in Environmental Litigation.

Ms. Corley was an associate at Gibson Dunn from 2013 to 2014.  From 2014 to 2016, she served as a law clerk to the Honorable Amy Berman Jackson of the United States District Court for the District of Columbia.  She rejoined the firm in 2016.