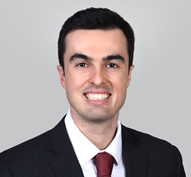 Patrick J. Fuster is an associate in the Los Angeles office of Gibson, Dunn & Crutcher.  He is a member of the firm’s Appellate and Constitutional Law, and Class Actions practice groups.

Before joining the firm, Mr. Fuster served as a law clerk to the Honorable John G. Roberts, Jr., Chief Justice of the United States, the Honorable Vince Girdhari Chhabria of the U.S. District Court for the Northern District of California, and the Honorable Paul J. Watford of the U.S. Court of Appeals for the Ninth Circuit.