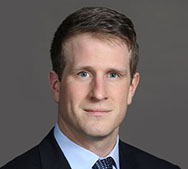 Lyons George is an associate in the San Francisco office of Gibson, Dunn, & Crutcher, where he practices in the Firm’s Litigation Department.

Lyons received his B.A. in English Literature from the University of Maryland, and his J.D. from Stanford Law School. During law school, he served as a teaching assistant at the Stanford Graduate School of Business and an extern in the Yosemite Park Prosecutor’s Office. Lyons joined the Firm following a clerkship with the Honorable Richard Seeborg, Chief United States District Judge for the Northern District of California.

University of Maryland - 2011 Bachelor of Arts