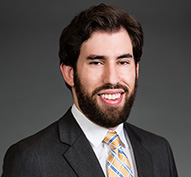 Jason Zachary Goldstein is a partner in the New York office of Gibson, Dunn & Crutcher and is a member of the Business Restructuring and Reorganization Practice Group.

Mr. Goldstein has significant expertise in restructuring, bankruptcy, and insolvency matters, including debt exchanges, distressed investments, acquisitions and financings, and other in‐court and out‐of-court transactions and arrangements.

Mr. Goldstein has been recognized as a “Rising Star” by New York Metro Super Lawyers for 2016-2022.  He has also been recognized by The Best Lawyers in America® as “One to Watch” in the area of Bankruptcy and Creditor Debtor Rights/Insolvency and Reorganization Law.

Mr. Goldstein is admitted to practice in the State of New York and before the United States District Court for the Southern District of New York.

University of Virginia - 2009 Bachelor of Arts