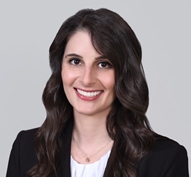 Danielle Hesse is an associate in the Los Angeles office of Gibson, Dunn & Crutcher. She practices in the firm’s Litigation Department.

Ms. Hesse has handled a broad range of cases at all stages of civil litigation, including consumer class actions, employment disputes (including wage and hour, classification, and discrimination claims), cybersecurity, antitrust, and real estate matters. Ms. Hesse has extensive experience with pre-trial discovery and motion practice, as well as in negotiating favorable settlements for her clients.

Prior to joining the Firm, Ms. Hesse was an associate at Simpson Thacher & Bartlett, where she successfully second-chaired a month-long jury trial, winning a $27 million verdict and an additional $10 million punitive damages award for her client.

Ms. Hesse earned her law degree in 2017 from the UCLA School of Law, where she earned the Masin Family Academic Excellence Gold Award in Cybersecurity. She received her Bachelor of Arts degree in Political Science and English & Creative Writing from Emory University in 2013, where she was a member of the Political Science National Honor Society, Pi Sigma Alpha, and was the Writing Editor of Alloy Literary Magazine.