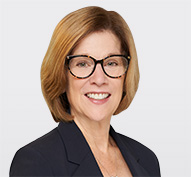 Jane C. Horvath is a partner in the Washington, D.C. office of Gibson, Dunn & Crutcher.  She is a Co-Chair of the firm’s Privacy, Cybersecurity and Data Innovation Practice Group, and a member of the Administrative Law and Regulatory, Artificial Intelligence and Automated Systems, Crisis Management, Litigation and Media, Entertainment and Technology Practice Groups.  Having previously served as Apple’s Chief Privacy Officer, Google’s Global Privacy Counsel and the DOJ’s first Chief Privacy Counsel and Civil Liberties Officer, among other positions, Ms. Horvath draws from more than two decades of privacy and legal experience, offering unique in-house counsel and regulatory perspectives to counsel clients as they manage complex technical issues on a global regulatory scale.

Ms. Horvath returned to Gibson Dunn after serving as Apple’s Chief Privacy Officer, where she led the company’s regulatory, policy and product strategy on all privacy- and cybersecurity-related legal matters.  In this role, Ms. Horvath shaped and implemented worldwide data protection laws, including in jurisdictions with omnibus privacy laws, such as the European Union, Canada, Australia, New Zealand, China and Japan, as well as jurisdictions considering similar laws, such as the United States and Vietnam.  Ms. Horvath’s practice focuses on counseling involving privacy, cybersecurity and data strategies – particularly those at the forefront of new regulation – and advocacy and strategy with global regulators and policy makers on these same issues.  She brings hands-on practical experience building privacy, cybersecurity and data solutions at the edge of innovation and at a global scale.  Ms. Horvath has extensive knowledge regarding encryption and related global laws and has been deeply involved in providing comments in response to the European Union Digital Markets Act and pending competition legislation in the United States, Japan and Australia.  She has extensive experience implementing encryption into different product applications and defending encryption against U.S. and global government access requests – issues that are top of mind right now for technology companies.  Additionally Ms. Horvath has an immense understanding of government surveillance and data localization laws.

Before joining Apple, Ms. Horvath was Global Privacy Counsel at Google from 2007 to 2011.  Ms. Horvath served as the U.S. Department of Justice’s first Chief Privacy Counsel and Civil Liberties Officer from 2006 to 2007, and, in that capacity, worked on the Privacy and Civil Liberties Oversight Board, an executive agency established in the 9/11 Commission Act of 2007.  While at the DOJ, she was also a member of the High-Level Contact Group and leader of the U.S. delegation of experts tasked with exploring common ground between the European Union’s Third Pillar data protection principles and U.S. federal privacy laws.  From 1995 to 2001, Ms. Horvath was the General Counsel of Digital City Inc., an America Online, Inc. (AOL) subsidiary, and Assistant General Counsel to AOL, where she helped draft the company’s first privacy policies.  Ms. Horvath started her legal career as an associate in the Washington, D.C. office of Gibson, Dunn & Crutcher in 1991.

Ms. Horvath is a recognized thought-leader in the areas of privacy and technology, frequently appearing as a keynote speaker and on panels hosted by global regulators and leading policy organizations.  She is routinely sought out by public boards, executives, and policy makers for strategic advice on privacy and cybersecurity matters.

Ms. Horvath received her J.D. from the University of Virginia and her Bachelor of Science from the College of William and Mary.