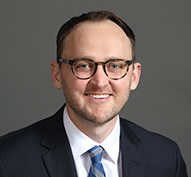 Sean Howell is an associate attorney in the San Francisco office of Gibson, Dunn & Crutcher.  He is a member of the firm’s Litigation Department.

He also completed a six-month secondment to Facebook’s antitrust group.  He has published several articles on competition law, including one that was recently cited by the Ninth Circuit in a published decision.

Mr. Howell received his law degree from Berkeley Law in 2016, where he was an editor for the California Law Review and an articles editor for Ecology Law Quarterly.  Mr. Howell received several academic awards while in law school, including American Jurisprudence awards in five courses and Prosser Prizes in four courses.  Prior to law school, he worked for several years as a journalist and nonprofit communications manager.  He earned his bachelor’s degree in English from Stanford in 2007.

Prior to joining Gibson Dunn, Mr. Howell was an associate at Covington & Burling LLP in San Francisco.  He also clerked on the U.S. District Court for the Northern District of California for the Honorable Charles Breyer, and on the Ninth Circuit Court of Appeals for the Honorable Kim Wardlaw.

Mr. Howell is a member of the State Bar of California. He is admitted to practice before the United States District Court for the Northern District of California and the Ninth Circuit Court of Appeals.