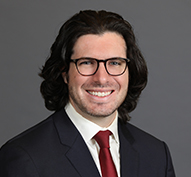 Mr. Krimsky received his Juris Doctor from Columbia Law School in 2020. At Columbia, Mr. Krimsky served as an editor of the Science and Technology Law Review. Additionally, Mr. Krimsky was honored as a Harlan Fiske Stone Scholar each of his three years at Columbia.

Mr. Krimsky is admitted to practice law in the state of California.