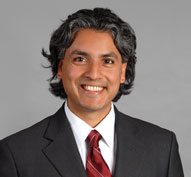 Dhananjay (DJ) Manthripragada is a partner in the Los Angeles office of Gibson, Dunn & Crutcher.  He is Chair of the firm’s Government Contracts practice group, and also a member of the Litigation, Class Actions, Labor & Employment, and Aerospace and Related Technologies practice groups.  Mr. Manthripragada has a broad complex litigation practice, and has served as lead counsel in precedent setting litigation before several United States Courts of Appeals, District Courts in jurisdictions across the country, California state courts, the Court of Federal Claims, and the Federal Government Boards of Contract Appeals.  He has first-chair trial experience and has successfully tried to verdict both jury and bench trials, and has served as lead counsel in arbitration and other alternative dispute resolution forums.  His practice spans a wide range of industries, and he has represented some of the world’s leading aerospace and defense, logistics/transportation, high-technology, finance, and pharmaceutical companies in their most significant matters.  Mr. Manthripragada is also highly regarded as a trusted advisor to clients regarding significant compliance/enforcement, contract, dispute resolution, and employment issues.  He was recognized in The Best Lawyers in America® Ones to Watch in Commercial Litigation in 2021 and 2022.

Complex Trial and Appellate Litigation:  Mr. Manthripragada has extensive experience in a broad range of business litigation, including class and mass action litigation.  He has served as lead counsel in employment, consumer, wage-and-hour, and unfair competition class actions and other complex litigation matters.  In addition to litigating, Mr. Manthripragada counsels clients on compliance with rapidly evolving state and federal law, as well as the development and implementation of business model changes and best practices to minimize the risk of litigation or government enforcement actions.  He has counseled clients across a range of industries on recent trends in worker classification, and successful strategies by companies and employers to manage potential liability.  He has also conducted numerous internal investigations regarding sensitive matters.  Clients have praised Mr. Manthripragada’s ability to craft practical legal solutions to complex problems.  Recognized as a thought leader in the industry, Mr. Manthripragada has delivered numerous seminars on key developments in worker classification and arbitration laws.  Some of Mr. Manthripragada’s most recent non-confidential matters include:

Community and Firm Involvement:  In addition to serving as a practice group leader, Mr. Manthripragada is Co-Chair of the Los Angeles Office’s Diversity Committee. Mr. Manthripragada is also deeply committed to his pro bono practice and was recognized by the City of Los Angeles for his pro bono work on behalf of human trafficking victims and transition-aged foster youth.  He has been recognized by various other organizations, including the Bay Area Legal Aid Foundation, for his pro bono efforts.  He was also honored as a winner of Gibson Dunn’s Frank Wheat Memorial Award for his commitment to pro bono work.

Mr. Manthripragada currently serves on the board of the Los Angeles Urban League, a nonprofit organization dedicated to promoting education, job training, housing, and community development in underserved communities in Los Angeles.

Before attending law school, Mr. Manthripragada worked in the field of public health, including at the World Health Organization, Centers for Disease Control and Prevention, and the American Public Health Association.

Mr. Manthripragada is admitted to practice law in the District of Columbia and the state of California.