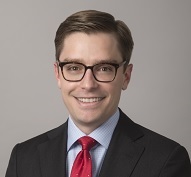 Tommy McCormac is an associate in the Washington, D.C. office of Gibson, Dunn & Crutcher. He practices in the firm’s Litigation Department.

Prior to joining the firm, Mr. McCormac served as a law clerk to the Honorable Anthony J. Scirica, U.S. Court of Appeals for the Third Circuit (2017-2018), and the Honorable Gerald J. Pappert, U.S. District Court for the Eastern District of Pennsylvania (2016-2017).

Mr. McCormac graduated magna cum laude from the University of Pennsylvania Law School in 2016, where he was elected to the Order of the Coif. At Penn, Mr. McCormac was a member of the Supreme Court Clinic, led by now–Judge Stephanos Bibas of the U.S. Court of Appeals for the Third Circuit. In the clinic, Mr. McCormac assisted in merits briefing and oral argument preparation in Bank of America v. Caulkett, 135 S. Ct. 1995 (2015). He also assisted in drafting briefs in opposition to certiorari in Herald v. Steadman, 135 S. Ct. 944 (2015) and Kellogg Brown & Root Services, Inc. v. Harris, 135 S. Ct. 1152 (2015). Also at Penn, Mr. McCormac was a senior editor of the University of Pennsylvania Law Review.

Mr. McCormac is admitted to practice in the District of Columbia and Pennsylvania and before the U.S. Court of Appeals for the Third Circuit, the U.S. District Court for the Eastern District of Pennsylvania, and the Board of Immigration Appeals.

University of Pittsburgh - 2013 Bachelor of Arts