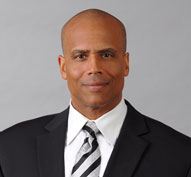 Marcellus Antonio McRae is a partner in the Los Angeles office of Gibson, Dunn & Crutcher.  He serves as Co-Chair of the firm’s Global Trial Practice Group.  California Lawyer featured him as one of its honorees in its 2015 California Lawyer Attorney of the Year Awards.  He is a member of the firm’s White Collar Defense and Investigations, Government Contracts, Media, Entertainment and Technology, and International Trade and Regulation Compliance Practice Groups.  Mr. McRae’s litigation and white-collar criminal defense practices focus on a wide variety of business disputes, internal investigations, and criminal prosecutions including defense of individuals and corporations in cases involving allegations of:  financial fraud, False Claims Act violations, public corruption, violations of federal and state environmental laws, health care fraud, wrongful death, criminal antitrust violations, and other matters.  He also represents and advises employers in wrongful termination, retaliation, and whistleblower claims.

Mr. McRae has first chaired numerous jury trials, bench trials, and arbitrations in both federal and state courts.  He also writes and speaks on trial and litigation skills, white-collar criminal defense, labor and employment law, and other topics.  From 1995 until joining Gibson, Dunn & Crutcher in February 1998, Mr. McRae served as an Assistant United States Attorney with the Criminal Division, Major Frauds Section, of the United States Attorney’s Office in Los Angeles.  While he was an Assistant United States Attorney, Mr. McRae investigated and prosecuted complex white-collar crimes (tax, securities, bankruptcy, and other business frauds) and traditional crimes that involved both jury and non-jury trial experience with a 100 percent conviction rate at trial.  He also drafted numerous appellate briefs filed in the Ninth Circuit Court of Appeals and had several arguments before the Ninth Circuit Court of Appeals.  Prior to joining the United States Attorney’s Office, Mr. McRae was an associate with Debevoise & Plimpton.

Some of Mr. McRae’s achievements include:

Professional and Community Associations and Activities

Mr. McRae is currently a member of the Public Counsel Board of Directors, the Board of Advocates of Human Rights First and the board of directors of Mental Health Advocacy Services. He is also a member of the steering committee of Just The Beginning (JTB), an organization dedicated to developing and nurturing interest in the legal profession among young students and increasing diversity in the legal profession and the judiciary.  Mr. McRae also serves on the Advisory Board of the NYU School of Law Policing Project and is a member of the Pro Bono Civil Rights Panel of the United States District Court for the Central District of California. He is also a former Co-Chair of the firm’s White Collar Defense and Investigations Practice Group and a former member of the Board of Directors of Big Brothers Big Sisters in Los Angeles.  He has served as an adjunct professor of Advanced Trial Advocacy at Loyola Law School, teaches trial advocacy at Harvard Law School, and was an instructor at the national level for the National Institute of Trial Advocacy.  Mr. McRae has conducted mock jury trial demonstrations at numerous national American Law Institute-American Bar Association conferences and has been a featured panelist at many professional seminars regarding a wide range of topics including trial advocacy, individual and corporate criminal defense, education reform, federal sentencing guidelines, police reform, and employment litigation.  He also frequently appears on television and radio and in print media as a legal commentator.  He has also been a Co-Chair from 2003-04 of the Lawyer Delegates to the Ninth Circuit – Central District of California; chair of the Environmental Crimes Committee for the West Coast Chapter of the American Bar Association; a member of the Judicial Appointments Committee for the Los Angeles County Bar Association; the Los Angeles County Bar Complex Court Committee; the Board of Trustees of the Los Angeles County Bar Association, the Executive Committee of the Criminal Justice Section of the Los Angeles County Bar Association; the Attorney Discipline Committee for the Central District of California; the Attorney Admissions Fund Board for the Central District of California; the Advisory Board of the Practical Law Company, and the Steering Committee of the California Minority Counsel Program. Mr. McRae was also a Deputy General Counsel to the Citizens’ Commission on Jail Violence for the County of Los Angeles, a member of the LAPD Police Commission Rampart Review Panel, and was on the List of Counsel for the International Criminal Court in the Hague.

Mr. McRae has been recognized in such publications as The Best Lawyers in America®.  He was recently named a California “Litigation Star” in the 2018 and 2019 editions of Benchmark Litigation.  BTI Consulting named Mr. McRae to its 2019 BTI Client Service All-Stars List, which recognizes attorneys “who deliver incomparable levels of client service excellence.”  California Lawyer featured him as one of its honorees in its 2015 California Lawyer Attorney of the Year Awards.  The Los Angeles Business Journal named Mr. McRae to its “Most Influential Minority Attorneys in Los Angeles” list in 2019 and 2016, and Who’s Who Legal: Investigations 2016, along with its sister publication, Global Investigations Review, recently recognized Mr. McRae as a leading individual for his expertise in internal and regulatory investigations.  He was named to the Daily Journal‘s list of “Top 100 Lawyers in California” for 2014, 2015 and most recently in 2020.  In 2015, the Daily Journal recognized Vergara v. State of California as one of its Top Plaintiff’s Verdicts By Impact in 2014.  In Vergara v. State of California, Mr. McRae helped secure a landmark civil rights decision that struck down California’s teacher tenure and dismissal statutes as unconstitutional.  Mr. McRae’s victory for Los Angeles County Metropolitan Transportation Authority et al. v. Parsons-Dillingham Metro Rail Construction Manager Joint Venture et al. was also recognized by the Daily Journal as one of the Top Defense Results in 2015.  Mr. McRae served as the lead defense attorney and helped Parsons-Dillingham obtain the defense win in that matter.  Mr. McRae’s latest victory for the City of Santa Monica, in Pico Neighborhood Association V. City of Santa Monica, landed him another Daily Journal Top Verdict for 2020 honor when a state appellate panel reversed a Los Angeles County Superior Court judge.  The victory helped set standards for future claims involving lawsuits targeting California cities for alleged violations of the California Voting Rights Act.  He was also named as one of the Daily Journal‘s “Top 20 California Attorneys Under 40” in 2003.  In January 2004, Mr. McRae was selected by Law & Politics magazine as one of California’s “Superlawyers” in the area of Business Litigation, based on a survey of more than 65,000 California lawyers.  He was named in 2006 among the “New Stars, New Worlds” by Lawdragon magazine, which features up-and-coming talent and lawyers with fascinating new practices.  In 2015, Mr. McRae, along with partner Theodore Boutrous, was recognized by The Recorder magazine in their annual “Litigation Department of the Year” competition in the “Ground Breakers” category.  In 2016, the Recorder magazine also recognized Mr. McRae in their annual “Litigation Department of the Year” competition in the “Game Changers” category.