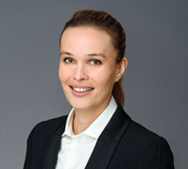 Joanna Moskwa is an associate in the New York office of Gibson, Dunn & Crutcher and a member of Gibson Dunn’s Real Estate Practice Group.

Prior to law school, Ms. Moskwa worked as a Senior Contract Analyst for the New York City Mayor.  Ms. Moskwa received her Bachelor’s Degree in Legal Studies, with highest honors, from Roma Tre University in Italy.  She is fluent in Polish, Italian, and French.  Ms. Moskwa is admitted to practice in the State of New York.