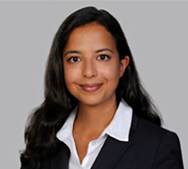 Mariam Pathan is an associate in the Munich office of Gibson, Dunn & Crutcher. She is a member of the firm’s Litigation and the White Collar Defense and Investigations Practices.

Ms. Pathan’s practice is focused on white collar defense and sensitive investigations with cross-border elements in the fields of FCPA, sanctions, AML and technical compliance.

Prior to joining the firm, Ms. Pathan worked at the legal departments of a global franchise corporation in Amsterdam and a tech company in the renewable energy sector in Berlin. She clerked with the transnational criminal law department of the German Foreign Ministry and the organized crime unit of the Berlin Public Prosecutor. Ms. Pathan was an editing assistant to the “Annotated Leading Cases of International Criminal Tribunals” book series in which she published several commentaries during and after law school.