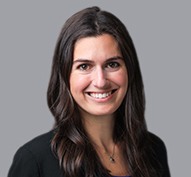 Emily Riff is an associate in the Denver office of Gibson, Dunn & Crutcher, where she is a member of the firm’s Litigation Department, with a particular focus on class actions and complex civil litigation.

Ms. Riff has substantial experience representing clients at the trial and appellate level.  In the technology space, she has litigated high-profile matters for clients in a range of cutting-edge cases, including many involving Section 230 of the Communications Decency Act as well as other theories of liability under ever-changing state and federal law.  Ms. Riff has also represented companies involving claims related to consumer protection, particularly in high-stakes and multi-jurisdictional class actions, and has developed comprehensive strategies to address novel theories of liability and to leverage the procedural complexities involved in these multi-jurisdictional matters.  In addition to litigating these matters, she also provides counseling and advice to clients on a wide range of environmental, social, and governance issues.

In addition, Ms. Riff maintains an active pro bono practice.  In her work protecting prisoners’ rights, Ms. Riff recently secured a victory at the Seventh Circuit for a mentally ill inmate who was denied counsel after prison officials failed to treat the inmate’s schizophrenia and also represents a former inmate in a First Amendment lawsuit against prison officials who denied the inmate his request for kosher meals, where she recently secured the reversal of summary judgment in favor of the prison officials.  Ms. Riff also represented a not-for profit media organization before the United States Supreme Court, the United States Court of Appeals for District of Columbia, and the United States District Court for the District of Columbia in connection with bringing a First Amendment challenge seeking to unseal contempt proceedings.  Ms. Riff also represented a women’s health organization in an appeal to the United States Supreme Court.

Prior to joining the firm, Ms. Riff served as a law clerk to the Honorable Paul J. Watford of the United States Court of Appeals for the Ninth Circuit.  She graduated from the University of Virginia School of Law where she served as Notes Development Editor on the Virginia Law Review and was elected to the Order of the Coif.

Ms. Riff is admitted to practice in the State of Colorado and is a member of the Colorado Women’s Bar Association.