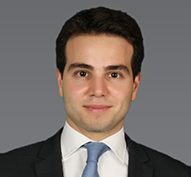 Abdallah Salam is an associate in the New York office of Gibson, Dunn & Crutcher.  He is a member of the Litigation and International Arbitration Practice Groups.

His pro bono work has involved representing plaintiffs in lawsuits under the Foreign Sovereign Immunities Act and advising non-governmental organizations in connection with economic sanctions and anti-corruption laws and regulations.

Before joining private practice, Dr. Salam served as a Lecturer in the Philosophy, Politics and Economics (PPE) program at Oxford University for two academic years.  He has also worked at the U.N. Office of Legal Counsel, the World Bank, Human Rights Watch, and Google.

University of Oxford - 2014 Doctor of Philosophy

University of Oxford - 2011 Master of Arts