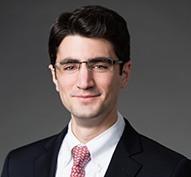 David Salant is an associate in the New York office of Gibson, Dunn & Crutcher.  Mr. Salant is an experienced litigator who helps companies and individuals in a wide variety of industries — including financial services, fin-tech, energy, pharmaceuticals, and consumer goods — to analyze and resolve complex commercial, regulatory, and white-collar criminal disputes.  He has represented multinational companies defending their corporate transactions in litigation across multiple fora; hedge funds and traders under regulatory and criminal scrutiny for derivative and cryptocurrency transactions; senior executives accused of securities, accounting, and tax offenses; and public and private companies targeted by others’ fraud and demanding satisfaction.

Mr. Salant has significant trial advocacy and motion practice experience.  He has taken first-chair roles in witness examinations, jury addresses, depositions, and settlement negotiations; authored and argued motions in federal and state court; and served as lead counsel in a federal jury trial.  Mr. Salant has lectured at the New York City Bar Association, where he is a member of the Federal Courts Committee, on the subject of effective federal district court advocacy.  He has also trained and supervised junior attorneys at the Firm in their first stand-up, in-court roles.

Mr. Salant is admitted to practice in the State of New York and before the United States District Courts for the Southern and Eastern Districts of New York.

Client Alert - March 9, 2021 | False Claims Act Circuit Splits Proliferate as Supreme Court Declines to Resolve Split Concerning Key Element of FCA Claims
Publications - February 23, 2021 | The Due Process Protections Act: Congress Directs Judges to More Actively Prevent and Remedy Prosecutorial Brady Violations
Publications - December 3, 2020 | Due Process Protections Act Sends a Message to the Government
Top
This website uses cookies to provide analytics on user traffic. By continuing to browse our website, you consent to our use of cookies as set forth in our Cookie Policy. However you may visit Cookie Settings to customize your consent.
Cookie SettingsACCEPT
Privacy & Cookies Policy