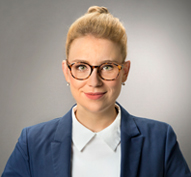 Annekathrin Schmoll is an associate in the Frankfurt office of Gibson, Dunn & Crutcher. She is a member of the firm’s Litigation and International Arbitration, Environmental, Social and Governance (ESG), White Collar Defense and Investigations as well as the Antitrust and Competition Practices.

Ms. Schmoll has a wide experience in the field of complex arbitration and commercial litigation, both domestic and cross-border. She represents German and international clients in commercial, corporate and civil disputes in institutional and ad hoc arbitration proceedings as well as before German courts, including representing clients in German model declaratory actions. Her further focus area is court- and out-of-court representation in antitrust disputes.

Handelsblatt / The Best Lawyers™ in Germany 2022/2023 have again recognized Ms. Schmoll in their list “Ones to Watch” for Litigation, International Arbitration and Arbitration & Mediation.

Prior to joining Gibson Dunn, Ms. Schmoll was an associate and member of the litigation, arbitration & ADR and antitrust law practice groups in the Frankfurt office of a renowned international law firm. She has represented a company in matters involving the US Department of Justice (DOJ), companies in antitrust damage claims and was frequently involved in arbitral proceedings.

She studied law at the Universities of Gießen and Kiel, Germany, and earned her doctor’s degree from the University of Göttingen in 2014. Before completing her second bar examination at the Higher Regional Court of Braunschweig in 2016, Ms. Schmoll was a research associate and trainee in the Frankfurt office of other international law firms. Ms. Schmoll has been admitted as a German lawyer (Rechtsanwältin) since 2016.

In addition to her native German, she is fluent in English.

Ms. Schmoll is a member of the German Arbitration Institute (DIS) and of DIS40, a German initiative of young arbitrators; of the Young ICCA, a world-wide arbitration knowledge network for young practitioners and students; of ArbitralWomen – the International Network of Women in Dispute Resolution; of the Kartellrechtsforum Frankfurt am Main e.V., a panel in the field of German and European antitrust law; and of the German-American Lawyers Association (Deutsch-Amerikanische Juristen-Vereinigung e.V.).