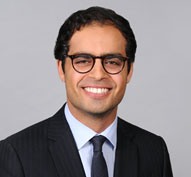 Mr. Soleimani has successfully represented clients in a wide variety of federal and state matters through trial and appeal.  His practice focuses on complex commercial litigation, with an emphasis on intellectual property, technology, entertainment, and constitutional matters.

From 2015 to 2016, Mr. Soleimani served as a law clerk to Judge Christina A. Snyder of the United States District Court for the Central District of California.

Mr. Soleimani earned his law degree from Yale Law School.  At Yale, Mr. Soleimani was Co-Editor-in-Chief of the Yale Law & Policy Review, a member of the San Francisco Affirmative Litigation Project, and a Fellow of the Information Society Project at Yale Law School.  In addition, he served as a judicial extern to then-Justice Dalveer Bhandari of the Supreme Court of India, now a member of the U.N.’s International Court of Justice.