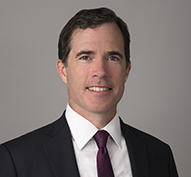 Patrick Stokes is a litigation partner in Gibson, Dunn & Crutcher’s Washington, D.C. office. He is the co-chair of the Anti-Corruption and FCPA Practice Group and a member of the firm’s White Collar Defense and Investigations, Securities Enforcement, and Litigation Practice Groups.

Mr. Stokes’ practice focuses on internal corporate investigations, government investigations, enforcement actions regarding corruption, securities fraud, and financial institutions fraud, and compliance reviews. He has tried more than 30 federal jury trials as first chair, including high-profile white-collar cases, and handled 16 appeals before the U.S. Court of Appeals for the Fourth Circuit.  Mr. Stokes regularly represents companies and individuals before DOJ and the SEC, in court proceedings, and in confidential internal investigations.  Mr. Stokes is recognized by Chambers Global and Chambers USA as a leading FCPA practitioner.

Prior to joining Gibson Dunn, Mr. Stokes spent nearly 18 years with the U.S. Department of Justice (DOJ). From 2014 to 2016 he headed the FCPA Unit, managing the DOJ’s FCPA enforcement program and all criminal FCPA matters throughout the United States, covering every significant business sector, and including investigations, trials, and the assessment of corporate anti-corruption compliance programs and monitorships.  Mr. Stokes also served as the DOJ’s principal representative at the OECD Working Group on Bribery working with law enforcement and policy setters from 41 signatory countries on anti-corruption enforcement policy issues.

From 2010 to 2014, he served as Co-Chief of the DOJ’s Securities and Financial Fraud Unit.  In this role, he oversaw investigations and prosecutions of financial fraud schemes involving market manipulation, accounting fraud, benchmark interest rate manipulations, insider trading, Troubled Asset Relief Program (TARP) fraud, government contract and procurement fraud, and large-scale mortgage fraud, among others.  Mr. Stokes also led the successful prosecution of one of the largest bank and securities fraud cases to come out of the financial crisis.

Mr. Stokes received his bachelor’s degree and Juris Doctor from the University of Virginia, where he was an editorial board member of the Virginia Journal of Social Policy and the Law.

Mr. Stokes is a member of the Maryland State Bar and the District of Columbia Bar.

University of Virginia - 1989 Bachelor of Arts