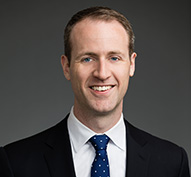 Connor Sullivan is a senior litigation associate in the New York office of Gibson, Dunn & Crutcher.  He is a member of the Firm’s Media, Entertainment, and Technology; Appellate and Constitutional Law; Privacy, Cybersecurity and Data Innovation; and Intellectual Property Practice Groups.

Mr. Sullivan’s practice embraces a broad range of high-stakes complex litigation in state and federal court, especially on behalf of technology and media companies.  He has significant experience at the fact development and trial stage of litigation representing both plaintiffs and defendants, including in jury trials involving billions of dollars in potential damages.  He has conducted and defended witness examinations in depositions and at trial and has successfully argued dispositive and evidentiary motions in court.  He has filed merits, amicus, and certiorari-stage briefs before the federal courts of appeals, state appellate and supreme courts, and the United States Supreme Court.

Mr. Sullivan has significant experience in First Amendment matters representing news media organizations and reporters, as well as litigating attempts to restrain speech prior to publication.  Mr. Sullivan has been involved in some of the Firm’s major recent First Amendment victories, including successfully representing members of the White House press corps suing to secure the return of suspended press credentials and representing Mary Trump, the niece of President Donald Trump, in successfully opposing the Trump family’s attempt to enjoin the publication of her bestselling family memoir.  Before joining the Firm, Mr. Sullivan served as a member of the trial team in one of the largest defamation suits ever tried.  Mr. Sullivan has also worked on behalf of pro bono clients in connection with immigration and First Amendment rights.

The Best Lawyers in America® has consistently recognized Mr. Sullivan as “One to Watch” since 2020, including in Entertainment and Sports Law.  He has consistently been named in the Super Lawyers New York Metro “Rising Stars” list in the area of litigation since 2020.

Prior to joining Gibson Dunn, Mr. Sullivan was an associate at Williams & Connolly LLP in Washington, D.C., where he focused on defending news organizations in defamation actions.  He was also involved in significant copyright, product liability, and breach of contract actions.

Mr. Sullivan clerked for the Honorable Thomas B. Griffith of the United States Court of Appeals for the District of Columbia Circuit and the Honorable Katherine Polk Failla of the United States District Court for the Southern District of New York.  In the summer after law school, he served as what is now called a Phillips Fellow in the Office of the Solicitor General at the Department of Justice.

Mr. Sullivan graduated from Yale Law School in 2013, where he was a director of the law school’s Supreme Court clinic, an editor of the Yale Law Journal, the Executive Editor of the Yale Journal on Regulation, and a winner of the Morris Tyler Moot Court competition.  He published an academic comment entitled A First Amendment Approach to Generic Drug Manufacturer Tort Liability, 123 Yale L.J. 495 (2013).  Prior to law school, Mr. Sullivan was a strategy and operations consultant for McKinsey & Company.  Mr. Sullivan graduated with distinction from the University of Virginia in 2008, where he was elected to Phi Beta Kappa.

University of Virginia - 2008 Bachelor of Arts